Is Omaze legit or a scam?

Omaze is one of the largest fundraising platforms out there, boasting millions of users each year. But how many of those users know how much of their money is truly making it to the people they are donating to? Does Omaze have the best interest of its users at heart? Or is it a scam?

If the thought of someone scamming your well-intentioned donation makes you red in the face, don’t worry, we’ve got your back. We’ve done the research to find out exactly how legitimate Omaze is, who is using it, and ultimately how to get the most out of your money when donating to those in need.

Back to the big question, is Omaze a scam, or are they legit?

Omaze is a legitimate fundraising platform that provides a unique service to its users to help them raise money for charity, but with a lot of hidden terms and fees. They market themselves as different than other fundraising platforms due to their “dream-come-true” experiences that “anyone has the chance to win,” but what does that really mean, and should you give them your money?

Oh, you want our opinion?

Based on our research and analysis, we can say that Omaze is a legitimate fundraising platform that does what they say: raise money for charity and provide awesome prizes while doing it. However, that doesn’t automatically make them a “good” company and does not mean we endorse them. Due to their secretive fundraising model (which we’ll talk about below) and the fact that they are for-profit, we would not necessarily recommend choosing them if you want to make the most impact with your donated funds. It would be a better decision to find a non-profit that fits your interest and support them directly, but then you probably won’t have a chance to win a new car so choose accordingly.

If you’re still not sure about Omaze, here are five questions that we asked during our research to help explain their platform more and alleviate some of your concerns.

1. Do people actually win the sweepstakes on Omaze’s website?

It is genuine to wonder “Does anyone actually win Omaze?” Yes!! Real people have won and continue to win Omaze sweepstakes on a regular basis, with new winners being announced on their website every Wednesday. You can check out this article to see winners from all over the world in 2020.

Omaze contacts all winners via email and they have 24 hours to respond and claim their prize. Grand Prize winners also require a video call. Once they have been confirmed, Omaze provides all of the necessary paperwork and may perform a background check for certain experiences.

Many past winners have also shared their wins on social media, like this winner of a Lamborghini Aventador S.

2. What are the odds of winning Omaze?

Each raffle contains 100,000 entries. The odds of winning are 1:100,000. Omaze charges 5% per donation made via their platform, which means that they’re making $500,000 per campaign on average. Omaze may be making more than this, however not all campaigns disclose how much Omaze receives from each donation.

For example, in Hillary Clinton’s Omaze, Omaze received a flat rate regardless of what was donated rather than taking a cut from each donation. This means that if you donate $5 to this cause, this is equivalent to donating $4.95 to her campaign and only $0.05 to the actual charity itself. Check this article for more details on the odds of winning Omaze.

3. Have there been any Omaze scams?

Viral charity scams can happen on any online fundraising platform and we’ve all heard the horror stories of scammers using fake photos or stories to tug at the heartstrings of well-meaning supporters. For this reason, it is extremely important to thoroughly research anyone you are donating to, regardless of the platform.

Omaze has not had any reports of scams on their website and for this reason, it is important to make sure you are actually on their website when entering your payment details, which is www.omaze.com. Phishing scams may create websites that look similar to confuse you and steal your credit card information.

4. How much of your donation actually makes it to those in need?

Omaze is a for-profit company, meaning it holds on to a majority of the funds raised through its platform and only donates a small percentage to charity.

On their About page, Omaze claims that 60% of funds go to charity, which seems pretty reasonable, however, this is only part of the truth. Omaze donates 60% to charity only for fundraisers that have a celebrity experience included. If the fundraiser you’re donating to doesn’t have a celebrity, things may look very different because it will utilize a completely different fundraising model.

Here’s a breakdown of the fundraising models at Omaze:

Are you seeing the same thing we are? That means 15% of your funds will actually be donated to the people that need it. Imagine you donate $100 and $15 is actually given to those in need. Something seems wrong here.

We absolutely understand the overhead and expenses required to run an organization, but transparency is necessary. It is irresponsible for Omaze to allow users to believe 60% of every donation will go to a charity when this is simply not true.

The infographic below outlines the fundraising model and will help you gain a visual understanding of where your money will go if you choose to donate to Omaze.

5. Are users of Omaze satisfied with their services?

We have searched through reviews from Trustpilot and the Better Business Bureau to find out what users think about their experience with Omaze. Overall, reviews are mixed with some people having positive things to say, and others having a negative experience with the platform. 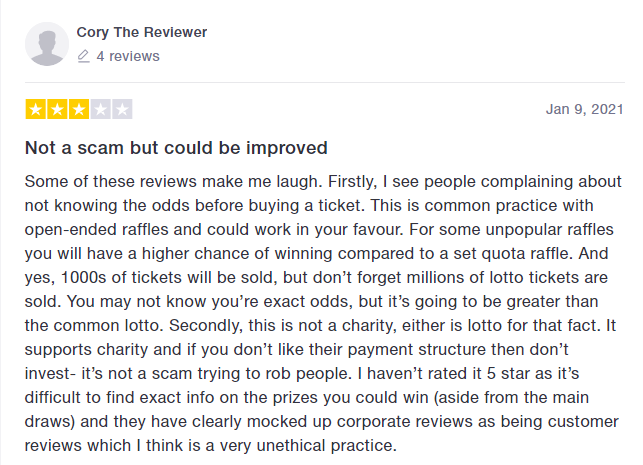 6. Has anyone won Omaze with free entry?

Omaze allows free entry without donations. Choose the option of “Enter without contributing” for making free entries. You can choose this option to enter the contest without making any donations at all.  All entries are equal and the chances of winning for all entries are equal.

As stated by Omaze in its official rules,

“Equality matters to us at Omaze: we use a system so that entries are treated equally. Each free entry is automatically assigned 2,000 entries (equivalent to the donation entries you get when you donate $100).”

After about 10 days of the closing of a campaign, the winner is chosen by a process of an automated random drawing to choose a potential winner. Thus, all entries stand on equal footing and have an equal chance of winning the sweepstake prize.

Check out the experience of this Omaze winner with a free entry.

7. Does Omaze work with charity organizations?

All fundraising campaigns on the Omaze platform are organized in conjunction with a charity organization. When you choose a campaign to donate to, the charity that will receive your funds will be listed on the campaign page, along with some information about what they do.

Omaze has also been endorsed and worked with many celebrities as a part of their fundraisers. 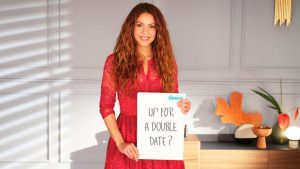 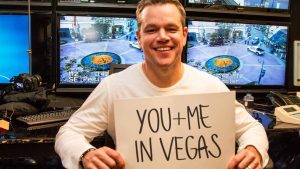 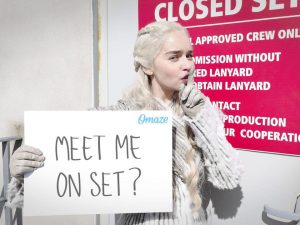 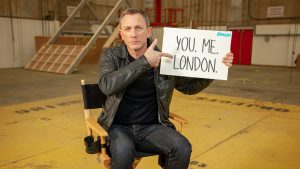 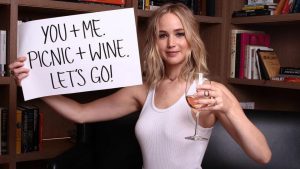 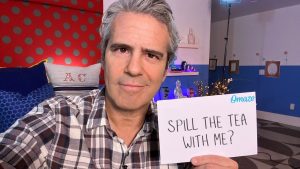 Is my Omaze donation tax-deductible?

Omaze donations are not completely tax-deductible, due to the fact that you have the opportunity to win a prize.  When you make a donation, the entire amount goes to the Charities Aid Foundation America (CAFA), a U.S. 501(c)(3) tax-exempt public charity. Since CAFA is a U.S. charity, every donation made to CAFA through Omaze is tax-deductible to the extent allowed by law. If your donation is for an experience or other prize, the tax-deductible amount will be limited to the excess amount given over the value of services and goods provided (which is unlikely to be much, if any at all).

Is Omaze a privately owned company?

Omaze is a privately owned, for-profit company that was founded in 2012 by Ryan Cummins and Matthew Pohlson and is based in Los Angeles, California.

The idea for Omaze came about after Ryan and Matthew attended a charity auction where they were excited to bid on a supper with Magic Johnson and attendance at a basketball game. As bidding got underway, however, they were shocked to find that many people at the event couldn’t even participate as the bids increased so quickly.

Ryan and Matthew knew this was a flawed fundraising model and were determined to find a better way. They took what they saw at the charity auction and combined it with up-and-coming crowdfunding platform features to develop an entirely new kind of platform and model. They were positive it would motivate more individuals to take part, which means raising more money for non-profits.

Does Omaze sell your information?

Omaze does not sell your information to third parties. However, they are required to disclose if any legal authorities subpoena your data.

Were there any Omaze controversies in the past?

Chris Pratt and Tom Holland used Omaze to promote Infinity War. During this campaign, some donated fans felt like they didn’t get what was promised and raised questions about how Omaze manages its giveaways.

Well, one of the main complaints came from people who donated during Tom Holland and Chris Pratt’s Infinity War promotion. The way the process worked is that you donated and then entered for a chance to win something like dinner with them or get an autographed item. The problem arose when some people donated between $10-$25 but never got entry into the giveaway, while others who donated just $5 did get access. Some fans felt this was unfair since they had paid more than others even though both paid the same amount towards charity.

This sparked outrage among certain community members who claimed it wasn’t fair, so many people who were charged less didn’t get what they thought they were paying for. This has led to fans demanding refunds from Omaze while others want their money refunded so they can use it to enter another giveaway instead. This has put the company in hot water with fans who feel cheated and that $25 wasn’t worth what they got. With this said, there’s no denying that while some people are upset, many others still donate to the campaign without complaining.

When asked about this situation, Omaze said that while they understand the complaints of certain fans, they feel like it’s not their responsibility to offer additional entries to people who donated less than others. They also reminded fans that these giveaways aren’t mandatory and were always opt-in.

Lawsuits that Omaze had to face?

The company has been involved in several lawsuits in recent years.

It is unclear exactly how much money Omaze has been ordered to pay in damages due to these lawsuits, but it is likely that the company has paid out millions of dollars. Omaze has faced criticism for its business practices, with some people arguing that the company is nothing more than a scam.

Omaze does not have a specific policy to handle refunds. (There are literally 0 articles in their support center around “refunds” and it is only mentioned once in their ToS.) They are in the business of gathering donations, not giving them back, and therefore have not developed a policy for refunding donors. If you need your donation refunded for one reason or another, contact their customer service for help.

How can I reach Omaze for support?